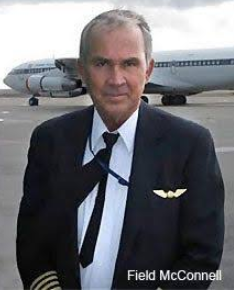 Captain Field McConnell, a former Northwest Airline DC-10 captain and a friend of Captain Dan Hanley, retired 9 years early as such because of his exposure of illegal modifications on Boeing aircraft in 2006 so that he could serve as an expert witness in future litigation.

At the time, Northwest Airlines, the Air Line Pilots Association, and the FAA were attempting to force him to see a notorious FAA psychiatrist, Dr. James Elliott, in Los Angeles in an attempt to ground him for life as a pilot on psychological grounds.

After his retirement, he continued his investigation into illegal modification of Boeing aircraft revealing the existence of the Boeing Uninterruptible Auto Pilot prior to 9/11 and the Malaysian Airlines Flight 370 disasters.

On December 10, 2006, Field McConnell reported the illegal modification on Boeing aircraft to the Federal Aviation Administration (FAA), Northwest Airlines, Federal Bureau of Investigation (FBI), NORAD and the USNA Superintendent. Shortly thereafter, Northwest Airlines, compelled by the United States Department of Justice (USDoJ), silenced Field McConnell, due to his inadvertent reopening of a safety issue closed in the June, 2006 settlement of a $615 million settlement paid by Boeing to the United States Department of Justice (USDOJ).

In 2006, Captain Field McConnell filed a federal lawsuit in Washington, DC but the case was tossed by the judge.